Training of users on the AJ Costs Omniclave 77 at the St. Mary’s Children and Community Hospital in Umuowa, Nigeria

The users get theoretical training on physics, for understanding the operation of the autoclave 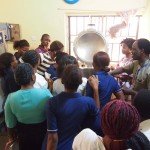